Hand gestures are a part of everyday life of a large number of cultures and civilizations. People use them to indicate approval, disapproval, pleasure or displeasure with something or someone. It is a shorthand method of communicating.

This is a commonly known hand gesture, known as the “devil’s horns” in the rock scene.

Mr Simmons described the mark sought to be protected as “a hand gesture with the index and small fingers extended upwards and the thumb extended perpendicular“. It is important to appropriately describe a trade mark when applying to register it so that the Trade Marks Office, consumers and other businesses know with sufficient clarity what mark protection is sought for. The mark must be described with clarity and precision.

He applied to register the mark in class 41 for “entertainment, namely, live performances by a musical artist; personal appearances by a musical artist”. In the USA a trade mark application can be filed claiming either actual use thereof in trade to date, or an intention to use the mark. Mr Simmons claimed that the mark was first used by him or by a company related to him or one licensed by him, or by a predecessor in interest at least as early as 14 November 1974, and was first used in commerce at least as early as 14 November 1974. He provided a photograph of himself displaying the hand gesture as evidence of his use of the sign.

Recently, though, Forbes Magazine reported that “Simmons has apparently reconsidered whether he might have valid trademark rights to the hand gesture, as he expressly abandoned the application with the United States Patent and Trademark Office. It is also noted that his application drew a fair amount of criticism from fellow musicians and others who saw the application as a shameless overreach by Simmons. Simmons, one of the most successful musician-entrepreneurs in history, owns a stable of other trademark registrations through his Gene Simmons Company.” Nice try, God of Thunder!

What would the likely outcome have been had Mr Simmons applied to register the hand gesture in South Africa?

It is possible to register a range of different marks as trade marks in South Africa. The most common types of marks are names, slogans, logos and devices. There are, however, certain “esoteric” marks that can also be registered as trade marks. These are the so-called non-traditional trade marks (e.g. smells, sounds, etc.). The South African Trade Marks Act No. 194 of 1993 defines a mark as:

“any sign capable of being represented graphically, including a device, name, signature, word, letter, numeral, shape, configuration, pattern, ornamentation, colour or container for goods or any combination of the aforementioned”

The types of signs that can constitute as “marks” is widely defined. Provided that the sign is capable of graphic representation, it qualifies as a mark. Technically, it is possible to represent a hand gesture graphically. The devil is, however, in the detail. In order to ensure that the correct protection is obtained, it is extremely important that the sign be adequately represented and described on the application. It must be described clearly and precisely in the application (and in the Register) in order for consumers, the Trade Marks Office and other businesses to understand the ambit of the rights. The representation must be is clear, precise, self-contained, easily accessible, intelligible, durable and objective (the Sickmann criteria). It will require a description of the sign to be endorsed on the application similarly to what Mr Simmons has done.

Qualifying as a mark is but only the first step in the enquiry. The next step is that the mark must be a “trade mark”. A trade mark is defined as:

Although not often done in trade, hand gestures can technically be used, or be intended to be used, to designate the goods or services of a specific business. However, in order for it to be accepted for registration the hand gesture must also be:

It can either be inherently so distinctive or have become distinctive by reason of prior use of the sign.

This is where gesture marks may run into difficulty. Technically, hand gestures are capable of having meaning and could distinguish the goods or services of one trader from those of another. However, inherently there is a problem with such marks. Hand gestures are not traditionally understood by consumers to be indicators of the origin of a business – even if they are novel. Businesses do not use hand gestures to identify their goods or services. A similar problem exists with shape marks. These marks are of very low inherent distinctiveness.

If a hand gesture is made by a representative of a company as part of an advertisement, consumers are highly unlikely to attach any significance to the gesture. Consumers simply do not consider hand gestures to be source identifiers. This is particularly so given the traditional use of hand gestures in South African society.

This does not, however, mean that it would be impossible for businesses to ever register hand gestures. It is possible to do so, but significant advertising and consumer education will need to take place before it can be done.

An example of one such hand gesture in South Africa would that of the Mamelodi Sundowns soccer team:

The hand gesture is incorporated in their logo, though they have not registered it separately as a gesture mark.

The hand gesture has become so ingrained in their business that their fans have even started indicating their allegiance to the team by using the hand gesture. When one goes to a soccer match and a supporter uses this gesture, other soccer supporters will immediately know which team the person supports. The players of the Mamelodi Sundowns team even use the hand gesture.

These gestures have become distinctive of those two teams and should be considered sufficiently distinctive to be registrable as trade marks.

Although not a legitimate business, gang members often use hand signs to indicate affiliation to a particular gang.

Hand gestures, however, run the same risk as all other trade marks, namely dilution or genericide.  In an era of social media trends (COVFEFE!), the risk of a specific hand gesture quickly becoming common in the relevant industry, if not policed properly, is ever present.

The devil’s horns hand gesture is one such gesture that has been used through the ages by a wide variety of rock stars. It is a gesture synonymous with music of a certain genre. Fans of all rock stars use the symbol. It is not peculiar to one.

A similar problem now exists with the “hand heart” gesture used by many public figures.

The heart hand gesture is claimed to have been first used by Armin van Buuren, and to later also be used by various other famous musicians.

So too, the fate of the devil’s horns gesture. Even if Mr Simmons was the first to use the sign, as claimed by him, the sign is no longer indicative of him or of his business. Amd had Mr Simmons applied to register the hand gesture in South Africa, the application would in all likelihood be refused registration based on a lack of distinctiveness, or if it proceed to registration, be liable to cancellation.

The take home lesson for businesses is that hand gestures are novel types of symbols that they could adopt as part of their corporate identity. Admittedly, hand gestures are not equally suitable for all businesses, but they may carry significant commercial value for some. Our world is constantly evolving, why shouldn’t our marketing strategies also evolve?

It would be possible to register such signs as trade marks, but those gestures must not be common in the relevant trade and considerable consumer education will first need to take place. Once registered, businesses would then have to strictly police the unauthorized use of such hand gestures to avoid them becoming generic, and losing distinctiveness. 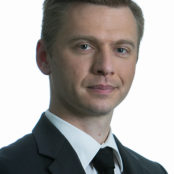