At IP Live we are fascinated with the Internet of Things (IoT). We are not only excited about the IoT’s potential impact on the global economy, but also its impact on how we live our lives! We were excited to read the white paper published by the intellectual heavyweights at the University of Pretoria’s Gordon Institute of Business Science titled “The Internet of Things – Extracting Business Value in South Africa”.

Firstly, what is the IoT? Jacob Morgan from Forbes provides us with the following definition here on Forbes.com:

“Simply put, (the IoT) is the concept of basically connecting any device with an on and off switch to the Internet (and/or to each other). This includes everything from cellphones, coffee makers, washing machines, headphones, lamps, wearable devices and almost anything else you can think of.  This also applies to components of machines, for example a jet engine of an airplane or the drill of an oil rig. As I mentioned, if it has an on and off switch then chances are it can be a part of the IoT.”

Here are five things from the white paper that got the IP Live team thinking:

1. The IoT is not just a big wave coming our way, it is a tsunami

The McKinsey Global Institute estimated that the IoT’s potential economic impact will be between $3.9 trillion to $11.1 trillion per year in 2025. For perspective, China’s GDP was recorded as $11 trillion in 2016 which represents 17.85% of the world’s economy.

Over the last few years we have seen technologies such as Fitbits, Apple Watch and Nest experience rapid growth and we are keeping an eye on who the next big players will be in the IoT space.

An extract from the white paper from the GIBS website follows:

“With over 9 billion connected devices in 2015 and estimates that this may grow to between 25 billion and 50 billion by 2025, soon enough internet nodes are bound to reside in the most familiar everyday things such as food packaging, home appliances and vehicles. For business, the opportunities are two-fold: IoT technologies are already used to transform business processes, for example through improved utilisation of assets; or alternatively, they are capable of enabling new business models, allowing new entrants and innovative incumbents to gain a competitive advantage.”

2. Protecting the privacy of individuals and organisations is probably the biggest challenge that IoT presents

With the plethora of digital devices connected to the internet at all times the amount of personal data being collected is unprecedented in human history. An example used in the white paper was that if there was unauthorised access to a patient’s pacemaker, the risks are not only a breach of personal medical information, but also a serious health risk to the patient.

Before investing in IoT technology it is definitely worth getting up to speed on the Protection of Personal Information Act, 2013 which is due to come into effect. As Danie Strachan from Adams & Adams advises here:

“It is important to do a high-level analysis of the personal information in the company. Identify the risk areas and start working on this. A company should appoint a task team to take up responsibility for PoPI compliance and readiness.”

3. IoT will have an impact on efficiencies and creating business value

The white paper articulated the impact of IoT on business in two ways: it will improve the efficiency of operations whilst reducing costs and it will create business value from the digitisation of physical objects delivering it to consumers in ways that were not previously possible.

4. It gives perspectives on where the IoT will likely impact South Africa the greatest

The white paper neatly summarises the impact that IoT will have on several industries. This analysis extends from agriculture, mining, logistics and warehousing to healthcare and insurance. The message is clear: IoT will disrupt many industries and will have a significant impact on many others.

The white paper laments the fact that South African companies are not adopting IoT technology to the extent that one may expect. The challenge of presenting a clear and convincing business case to investors is listed as one of the bigger challenges as well as IoT’s requirement of reliable, uninterrupted Internet connectivity.

New technologies will also cause regulatory challenges for legislators. For example, drone use was unregulated until the Civil Aviation Authority drafted regulations that are viewed as both overly prohibitive and unhelpful for businesses operating drones. Drones are now subject to procedures similar to those applied to aircraft operators, which may be a good or bad thing depending on your views.

A finding of the report reads:

“Considering the complexity involved in successful IoT implementations, we were surprised to find little evidence of extensive technologies or business partnerships with the South African IoT space. The companies interviewed were often inclined to cite partnerships with overseas stakeholders, rather than local initiatives, as examples of their work.”

While the report does not focus on the intellectual property (IP) considerations that IoT technologies present, we believe it will be significant. As Internet nodes begin appearing in everyday items from clothing, food packaging and home appliances there is likely to be many new companies and products seeking IP protection in the form of patents, designs, trade marks, copyright and know-how.

As mentioned above, the risks associated in protecting your clients’ confidential information cannot be overstated as data breaches may cause substantial reputational and financial harm to an IoT business. I, for one, would be devastated if you were able to see my step-count for today!

Download a copy of the report here on the GIBS website. It’s only 20 pages long – with pictures! 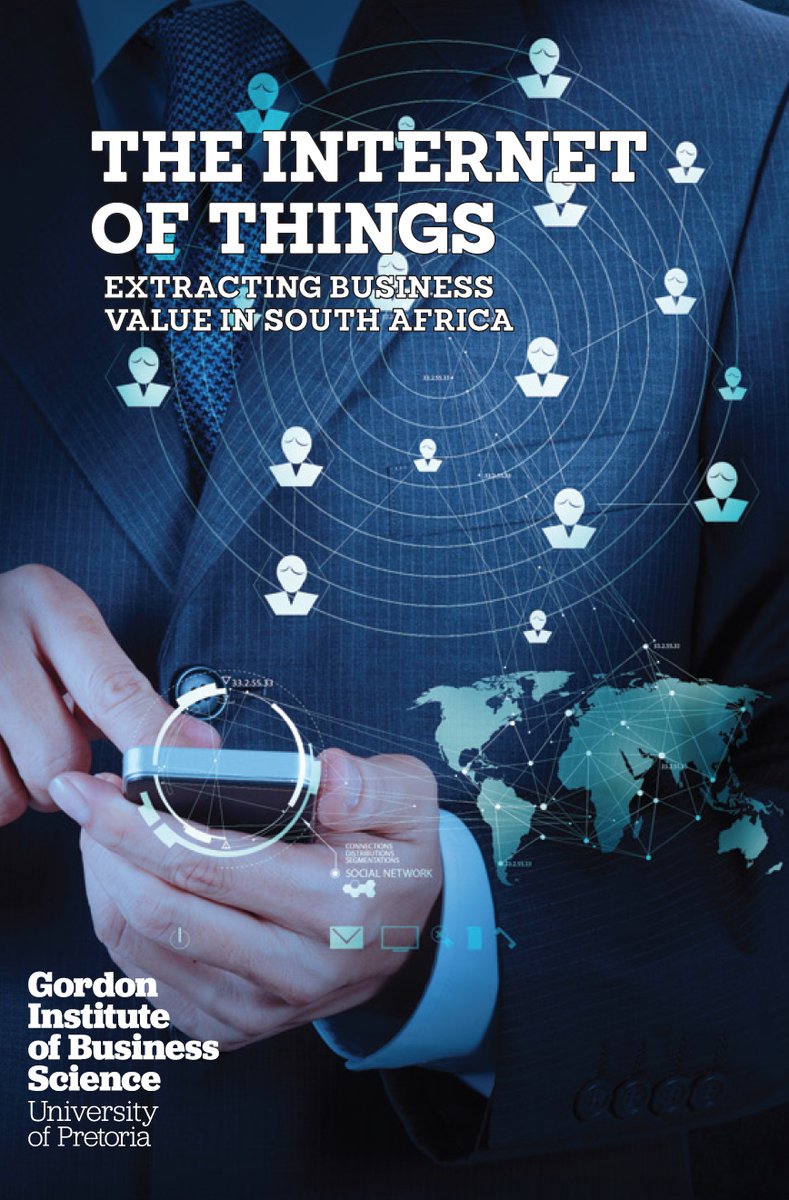