Although Andy Warhol proclaimed in 1968 that, in the future, everyone would be world-famous for fifteen minutes, it is unlikely that he could possibly have imagined today’s social media crazed world and the multiple platforms that exist to enable anyone, anywhere, to become a celebrity. In today’s world, being “famous for being famous” can be a full-time occupation and “Youtuber” would appear to be an acceptable career choice for many millennials.

One ramification of this has been the rise of the “social media influencer”. A social media influencer is someone with credibility in a particular industry and a wide reach, usually in the form of a large following on social media. Brands engage with an influencer who has reach in their particular industry, that person promotes the brand to his or her followers and the brand enjoys the benefit of what is effectively a personal endorsement to hundreds, thousands or even millions of persons directly in its target market. The social media influencer is, of course, generally paid to promote the product, either in money or in kind. It is not uncommon, for example, for clothing brands to gift free items to celebrities or established fashion bloggers with the expectation that they will then post photographs on social media of themselves wearing the items on Instagram or other social media, with an appropriate mention of the brand.

The use of social media influencers is but one form of what has been termed “native advertising” which is paid media that matches the form and function of the platform upon which it appears. The issue, as one might imagine, is that these endorsements, which constitute paid-for advertising, often appear among hundreds of other organic social media posts and may not be perceived as sponsored content by those who view them. Therein lies their very appeal to advertisers, especially in the modern consumer landscape that craves authenticity and personal connections. But, similarly, therein lies the potential to deceive consumers and fall foul of the law.

The USA’s Federal Trade Commission, which is tasked with tackling unfair business practices and consumer deception in the USA, is very clear on this issue. It has published detailed guidelines which spell out that any material connection between an advertiser and endorser must be disclosed in a clear and conspicuous manner. While wording such as “company x gave me this product for free” in a review would be ideal, it seems that using a hashtag such as “#sponsored” or even “#advertisement” might be sufficient for the FTC’s purposes. The FTC has even said that, given that a tweet is a mere 140 characters, commencing it with “#AD:” could get the message across.

An example from Kim Kardashian West’s Instagram Page. It is questionable whether merely thanking the brand would be considered a sufficient disclosure. This particular post was “liked” by over 1.4 million people. 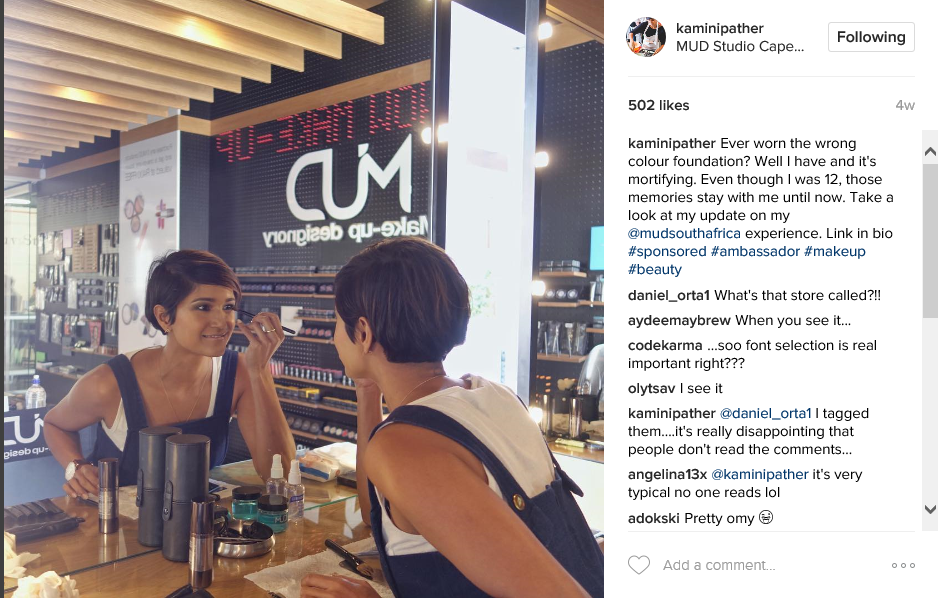 Winner of South Africa’s Masterchef Season 2 competition, Kamini Pather, has attracted an Instagram following of over 26 000 people and has seemingly cashed in on the social media influencer scene, pairing up with various different brands. This post uses the hashtags “#sponsored” and “#ambassador” to disclose her relationship with the make-up brand MUD.

But how will this issue be dealt with in South Africa where our regulators have yet to turn their attention to specific rules governing this form of advertising? The answer is likely to be found in the Consumer Protection Act 68 of 2008 (the “CPA”) and the Advertising Standards Authority’s Code of Advertising Practice (“ASA Code”) both of which set general standards relating to the advertising of products and/or services to ensure the public is not being misled.

Both the CPA and ASA Code provide very broad definitions of “advertising” and “advertisement” and these would likely apply to advertising by way of social media. When bloggers or influencers post on social media in relation to an advertiser’s products or services, those posts could also be regarded as advertisements, because they are intended to market, promote, advertise or publicise the advertiser or the relevant goods or services. Accordingly, this would also require compliance with the CPA and the ASA Code.

The CPA requires that advertising must take place in a fair and reasonable manner and that no misrepresentations be made. Goods or services must not be marketed in a manner that is likely to reasonably imply a false or misleading representation concerning those goods or services. Similarly, the ASA Code requires truthfulness and honesty in advertising. Could an argument be made that a paid-for advertisement which is not clearly labelled as one is misleading? Probably. After all, a consumer is far more likely to be induced to purchase a product that has been given a rave review by someone he or she knows or admires.

Although the CPA and ASA Code do not specifically deal with situations where influencers post content on social media in order to market or promote a brand or its goods/services, the ASA Code also requires that “advertisements should be clearly distinguishable as such whatever their form and whatever the medium used”.

The ASA Code also states that, in electronic media, particular care should be taken to distinguish clearly between programme content and advertising. Where there is a possibility of confusion, advertising should be identified in a “manner acceptable to the ASA”. While the ASA seems yet to have received any complaints regarding unidentified social media influencer endorsements, it seems likely that it will also insist on similar disclosures to those required by the FTC and that wording, whether in the form of a hashtag or something more substantial, will be needed to clearly identify a post as advertising content.

This being the current state of play, it is advisable that brands and social media influencers (both could be liable in the event of a breach) ensure that all posts contain an indication to the effect that the relevant posts are advertisements. This must be clear enough to avoid any misrepresentations or misleading of the public. One could insert the following at the end of the post: “(Sponsored ad)”. One could also consider using “#sponsored_ad”. Other wording may also be considered acceptable and ultimately, in the event of a challenge, it would be up to the advertiser to show that consumers in South Africa clearly understand that the wording used reflects the nature of the relationship between the brand and the influencer.

It is also important to bear in mind that any form of compensation or inducement, whether in monetary terms or some other form such as a discount, tickets to an event or free products, will likely trigger the need to disclose the relationship with the advertiser. Accordingly, in all of these circumstances, it is recommended that a clear message be inserted at the end of the post to the effect that the post is a sponsored advertisement.

The bottom line is that consumers have a right to know when something is a paid-for testimonial, rather than the personal and unbiased view of the endorser. And it is brands and social media influencers who bear the responsibility of making that disclosure clearly.