In a new regular series on WTR, we highlight marketplaces across the world that reportedly engage in the trade of counterfeit goods. To do this, we speak with local experts to identify the physical marketplaces that brand owners may want to monitor as part of their global anti-counterfeit enforcement efforts. This week, we focus on marketplaces in South Africa.

Located at the southern tip of Africa, the Republic of South Africa (RSA) has a population of around 58 million people. It has 72 border posts and shares land borders with Botswana, Mozambique, Namibia, Eswatini (formerly Swaziland) and Zimbabwe, and surrounds Lesotho.

A significant portion of the counterfeit goods circulating in South Africa are imported from China and other foreign countries. Although South African Customs and Border Police are effective in detecting and detaining containers and small consignments of counterfeit goods at the various ports of entry, some do filter through undetected.

With so many border posts shared and access to neighbouring countries, those trading in counterfeit goods can take advantage of the logistical loopholes in the flow of goods. For example, many containers and airfreight consignments are imported on a transhipment basis (purporting to be destined for the neighbouring states) and end up in the South African market. Furthermore, containers are round-tripped, transported by rail from seaports to the neighbouring countries and smuggled back into South Africa via road.

Anti-Counterfeiting enforcement in South Africa at a glance

In a nutshell, what should a rights holder know about enforcing against counterfeit goods in South Africa?

South Africa has an effective Intellectual Property (IP) rights enforcement framework, but it is critically important that brand holders register their trade marks with the Companies and Intellectual Property Commission (CIPC). Furthermore, South Africa is a signatory to various international intellectual property agreements, such as the Berne Convention, thus brandholders can enforce their copyright locally, provided certain requirements are met.  The following enforcement options are available:

The following documents are required in support of a recordal application:

It usually takes a few days to process the recordal application and, upon its approval by Customs, it is valid for 24 months and renewable every two years.

An important element in initiating and maintaining an effective border enforcement programme is to provide training to Customs and Border Police officials to create awareness within the enforcement community. It is imperative that brandholders participate in as many training events as possible to increase the prospects of detention of containers and smaller consignments at border level.

Arranging knock and talk exercises and negotiating voluntary delivery-up or surrenders are also imperative in removing counterfeit goods from circulation. These create awareness within the trading environment and provide supply chain information for further investigations.  In appropriate circumstances, municipal by laws may also be invoked to curtail the sale of counterfeit goods.

In-depth in-market investigations, surveys and intelligence-gathering exercises are key to understanding the extent of the problem, and for strategically planning intelligence driven search operations.

There is no specific piece of legislation in South Africa that holds landlords liable for the illegal activities of their tenants. That being said, it is possible to seek a civil High Court interdict or an injunction based on the common law of delict, which places a legal obligation on landlords to take steps to prevent unlawful conduct/activities from being performed at their premises/property. It may be possible to take action against landlords for aiding and abetting the illegal conduct performed at their premises/property should they be found to have knowledge and/or failed to act against or facilitated the unlawful conduct.

Furthermore, the National Prosecution Authority’s specialised Asset Forfeiture Unit (AFU) may enforce the provisions of Chapters 5 and 6 of the Prevention of Organised Crime Act, relating to the proceeds of unlawful activities. In particular, the AFU may launch High Court applications for preservation and forfeiture orders of buildings and/or manufacturing machinery for sale of such assets/property that are the proceeds of crime and/or property used to commit crimes. Alternatively, the AFU can issue and serve a notice on the current owners of the buildings, informing them of the unlawful conduct carried out at their premises by their tenants and placing them on terms to take all reasonable steps to avoid a repeat of such conduct. Should the relevant building be found to be utilised in the commission of an offence subsequent to such notice, the AFU would be in a stronger position to request/argue for the forfeiture of the building.

Are there any local dedicated anti-counterfeiting associations or organisations in South Africa?

Lobby groups worth mentioning include the Brandholder Anti-Counterfeiting Forum of the American Chamber of Commerce South Africa, which has been established to encourage collaboration between brandholders and other stakeholders to address common issues, such as counterfeiting, lobbying, relationships with law enforcement agencies and advocacy and training. The Consumer Goods Council of South Africa, an industry association that represents retail and manufacturing member companies, has launched a toll-free hotline that the public can use to anonymously report information related to illicit trade and the counterfeiting of products.

Counterfeit hotspots you should know in South Africa:

These are the counterfeit hotspots in South Africa, with most located in the country’s big cities.

Challenges of enforcement at this marketplace: There are numerous high-rise buildings, the most prominent of which are listed above, that have been converted into shopping malls and modified into several shops, storage facilities, manufacturing facilities or product completion centers (where counterfeit goods are manufactured or assembled). Johannesburg CBD is the main counterfeit goods hub in the country and notorious for the large-scale sale and distribution of counterfeit goods locally and to South Africa’s neighboring states.

It is impossible to identify the individuals behind these operations, effect arrest or prosecute the offenders, as many suspects are usually undocumented foreign nationals and part of established criminal enterprises/syndicates.

Recommendations to brand owners: The South African government has created a multi-disciplinary task force (consisting of members of the South African Police Service, Crime Intelligence Unit of the Police, South African Revenue Services (Customs), Immigration) to address the counterfeit goods problem in the Johannesburg CBD. Therefore, it is critically important for brandholders to participate in the intelligence-gathering investigations and as many subsequent joint search operations driven by the task force in the Johannesburg CBD as possible. 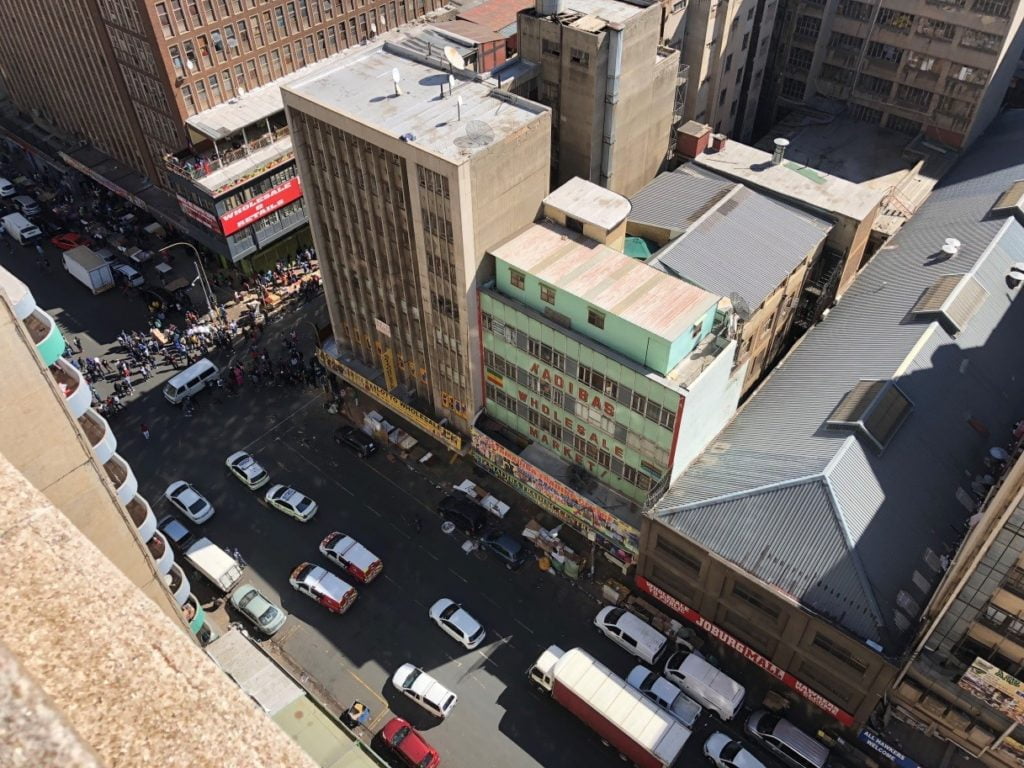 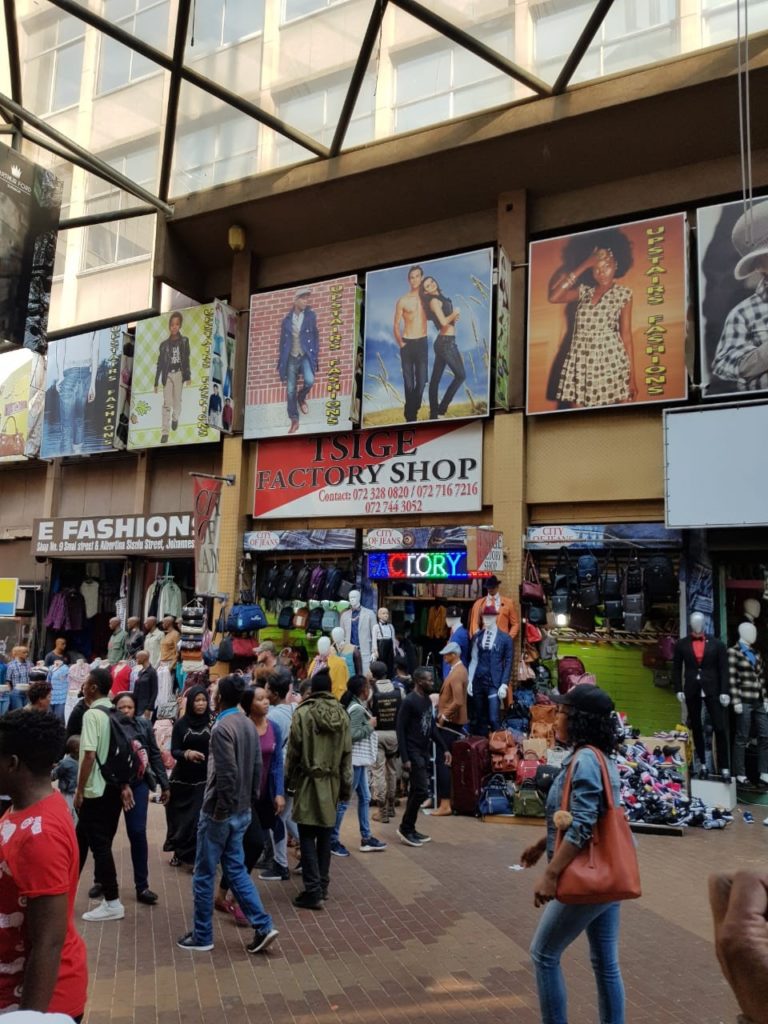 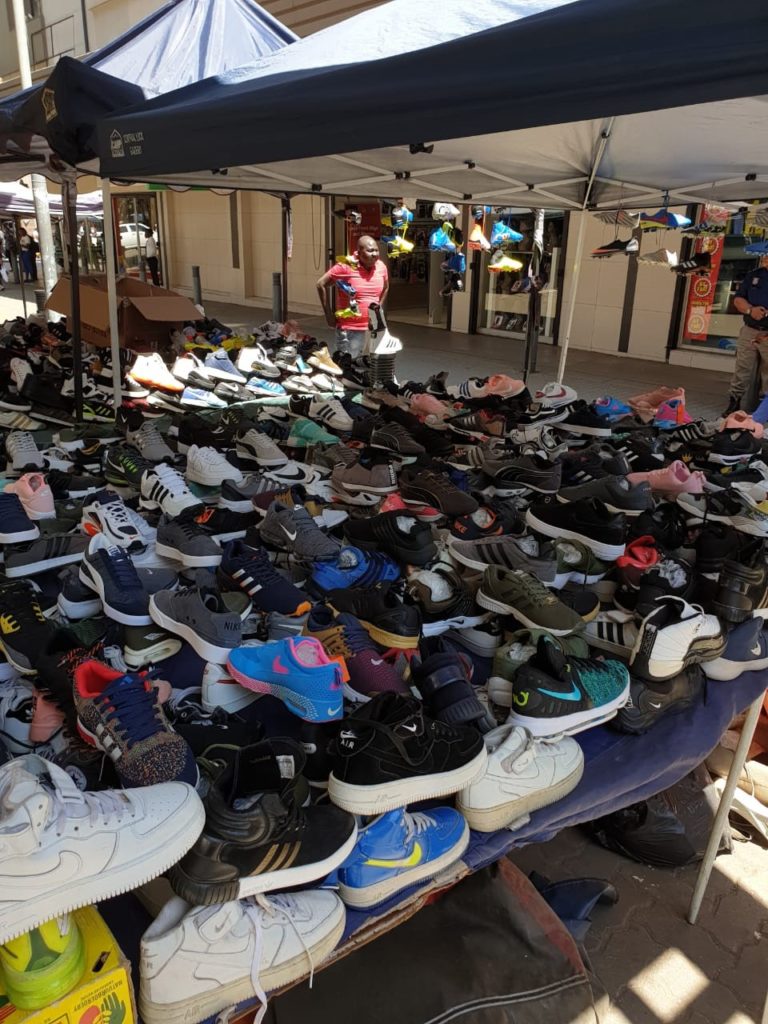 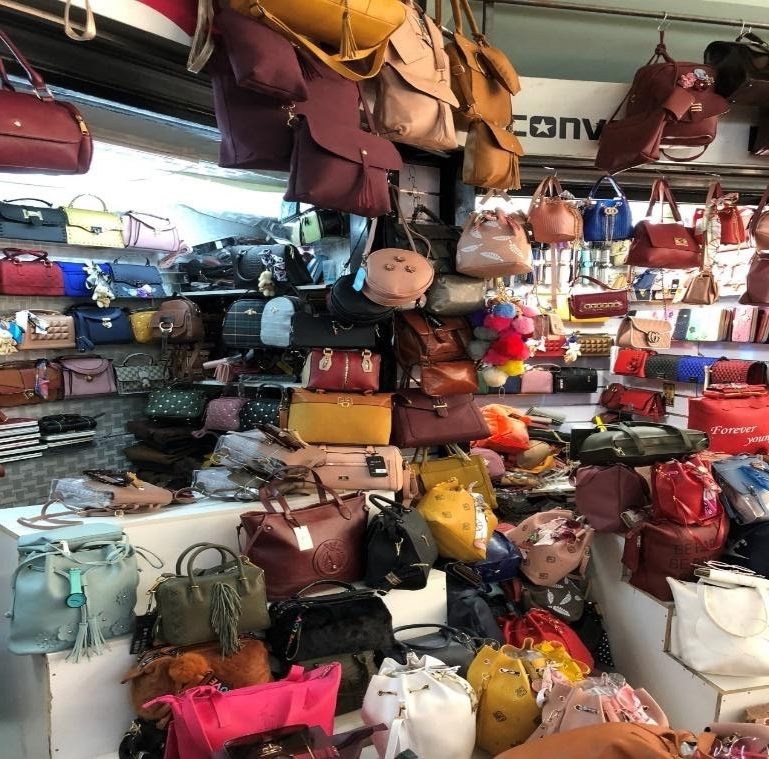 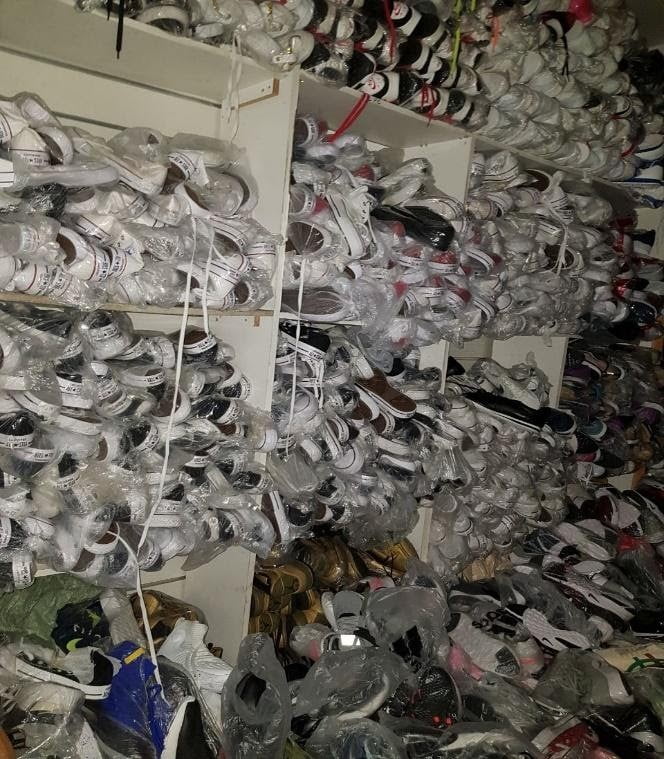 The central business district (CBD) of Johannesburg, the largest city in South Africa

Challenges of enforcement at this marketplace: Dragon City houses numerous small- to medium-sized shops offering a wide variety of counterfeit and unbranded merchandise for sale. Most of these shops do not readily display or advertise the sale of counterfeit goods, but have large quantities of counterfeit goods stored off site. Such products are usually sold on encrypted social media apps or on order.

As the counterfeit goods are kept off-site and only distributed to known individuals or by way of large orders, it is incredibly challenging to obtain the necessary evidence to pursue proceedings against suspects without in-depth and costly investigations, which often fail to reveal the source of the counterfeit goods.

The counterfeit goods in question are usually smuggled into the country from Mozambique through the Lebombo border post. The stock is usually not offloaded from the shipping containers and counterfeit goods are collected by buyers in the parking lot.

Recommendations to brand owners: To effectively take action against the traders situated in Dragon City, it is necessary to conduct in-depth investigations and surveillance, and obtain test purchases and search and seizure warrants to be executed at the suspect’s premises. 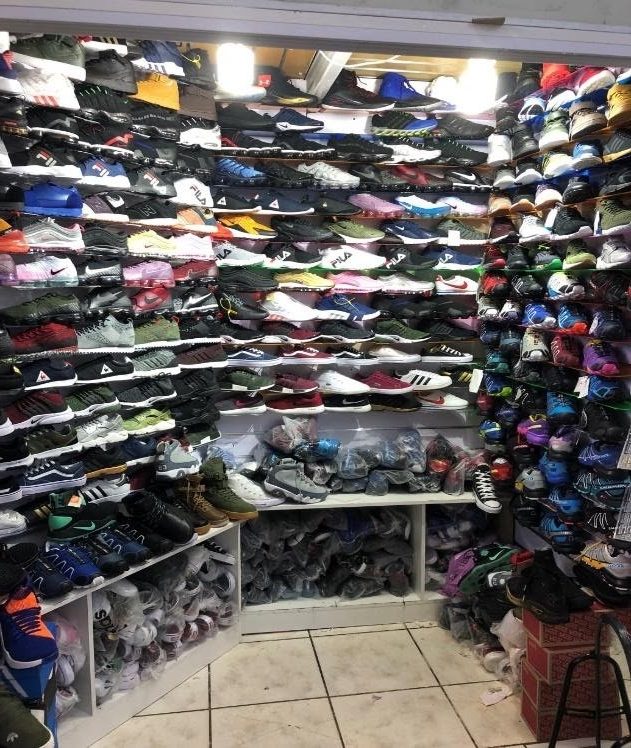 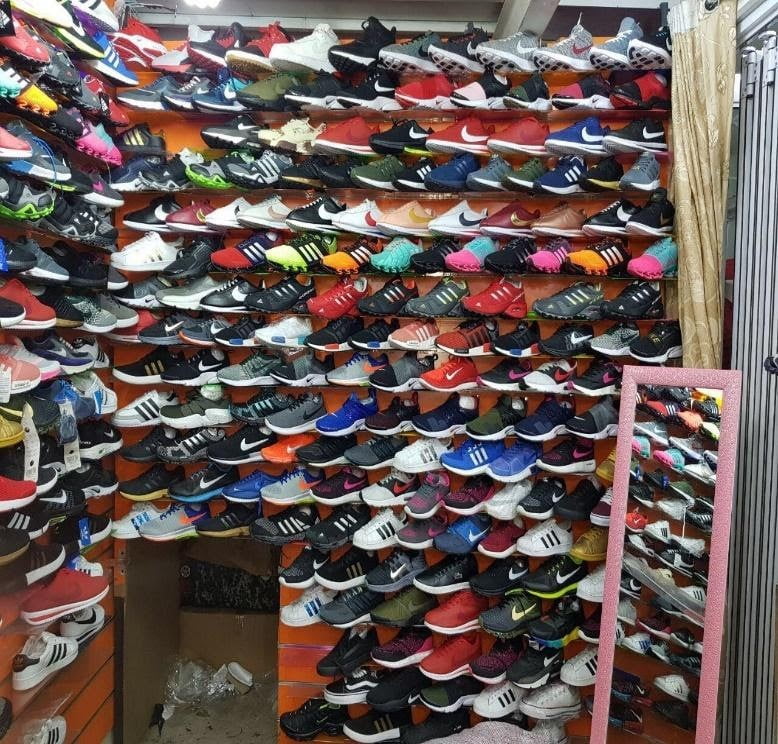 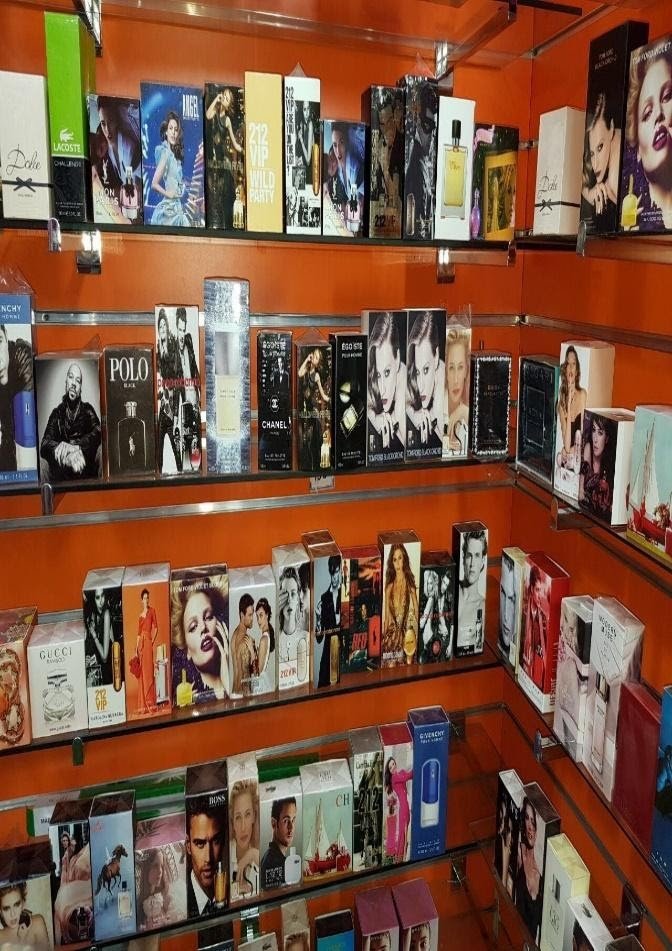 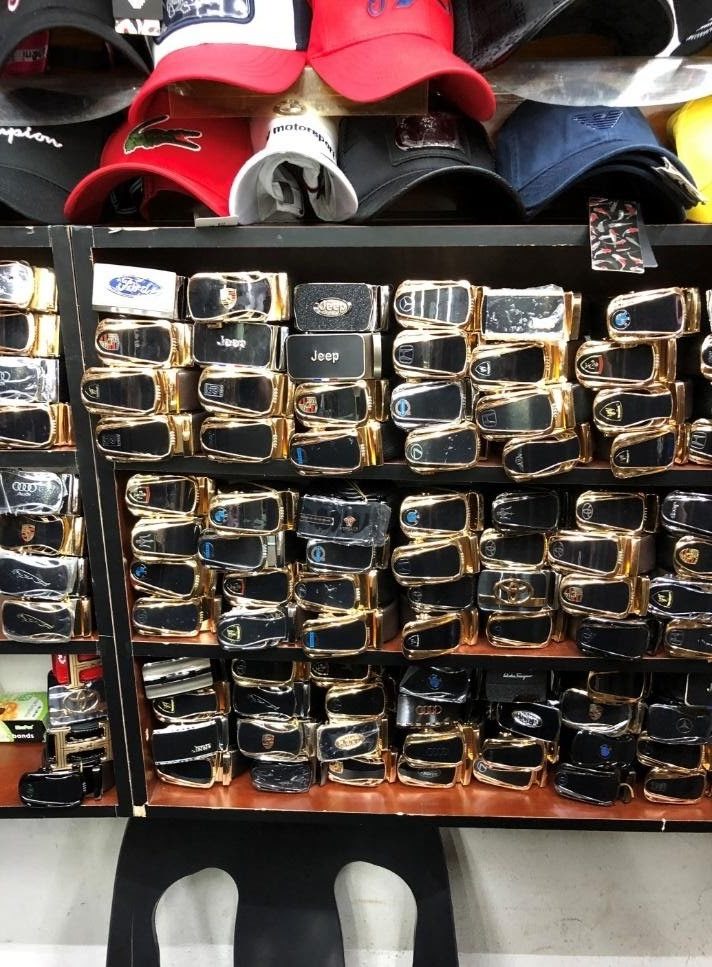 Challenges of enforcement at this marketplace: It is difficult to conduct search and seizure operations due to the level of violence perpetuated by the shop owners, most of whom are foreign nationals. The area is also notorious for gangsterism and therefore significant resources for security and manpower are required to conduct search operations safely. 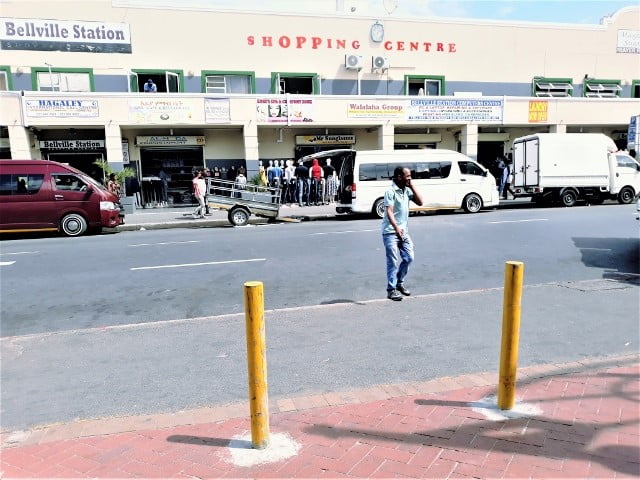 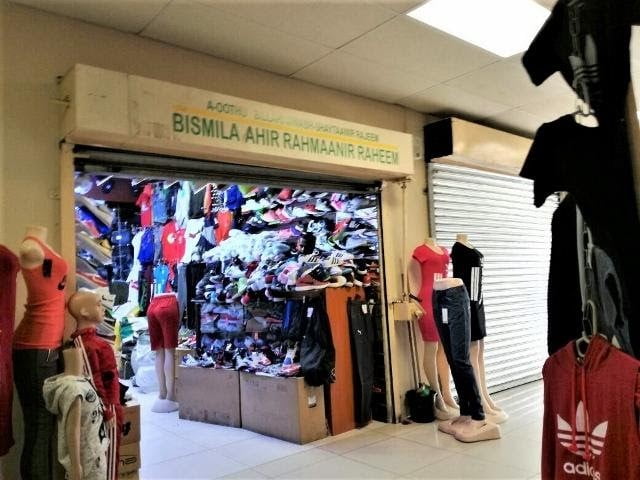 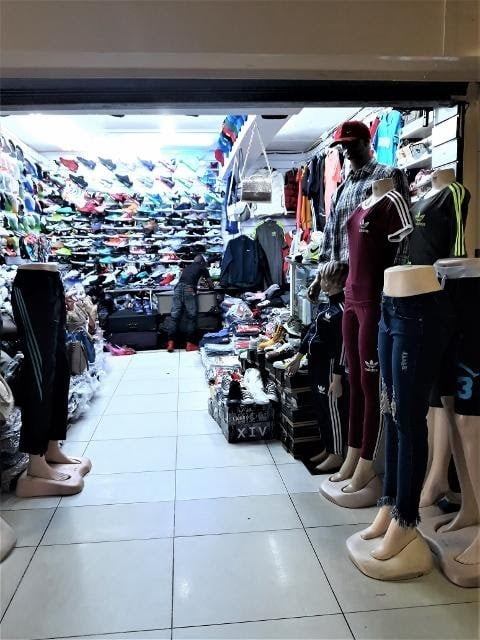 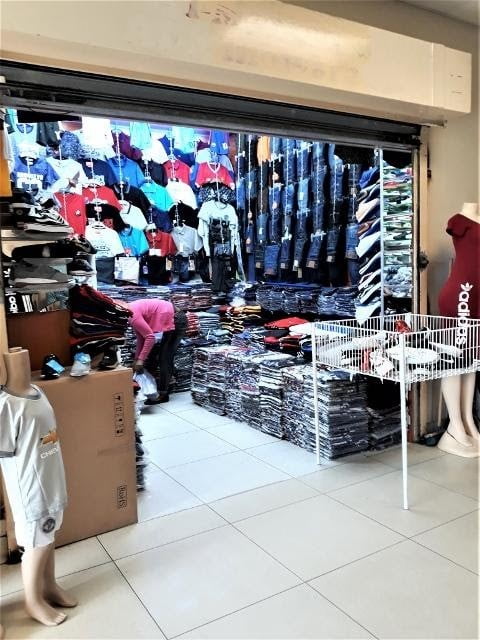 Location: Marabastad is a business area near the city centre of Pretoria in the Gauteng province (map link)

Challenges of enforcement at this marketplace: Marabastad comprises many small- to medium-sized shops, offering various counterfeit goods in low quantities for sale. The challenge faced in conducting enforcement operations in this area is that the shop owners and employees regularly become violent and attack the enforcement authorities.

The risk associated with these operations, coupled with the generally low quantities of goods identified in these stores, has deterred regular operations in this area. As a result, the shops have grown in size and now often include hidden storage compartments/rooms, in which large quantities of counterfeit goods are stored.

Accordingly, to combat the dissemination of counterfeit goods, it is important to conduct regular search and seizure operations in Marabastad. Additionally, the shop owners are often aware of enforcement operations and actively take measures to dissuade law enforcement and brandholders from raiding their stores. These measures include limiting the number of counterfeit goods on display or storing goods externally or in hidden compartments within the store. For these reasons, it is recommended that action be taken against these shops, despite the appearance of relatively low quantities of counterfeit goods on display. 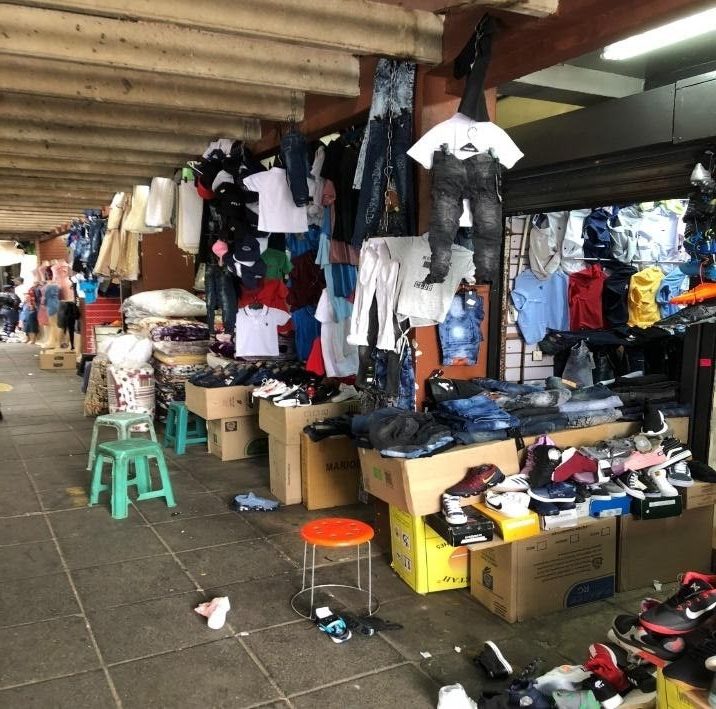 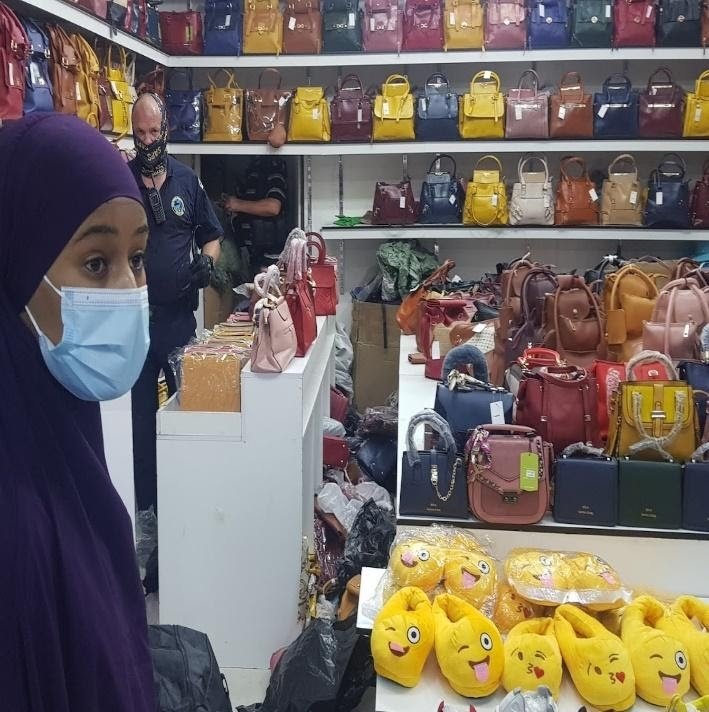 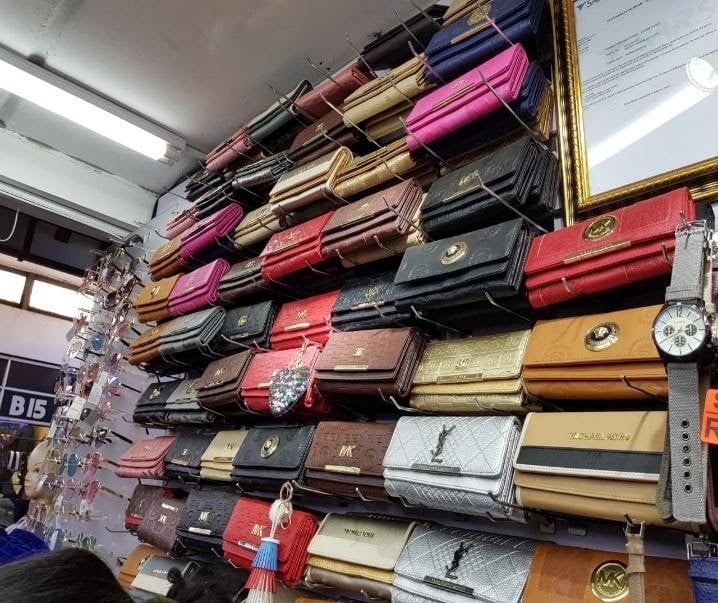 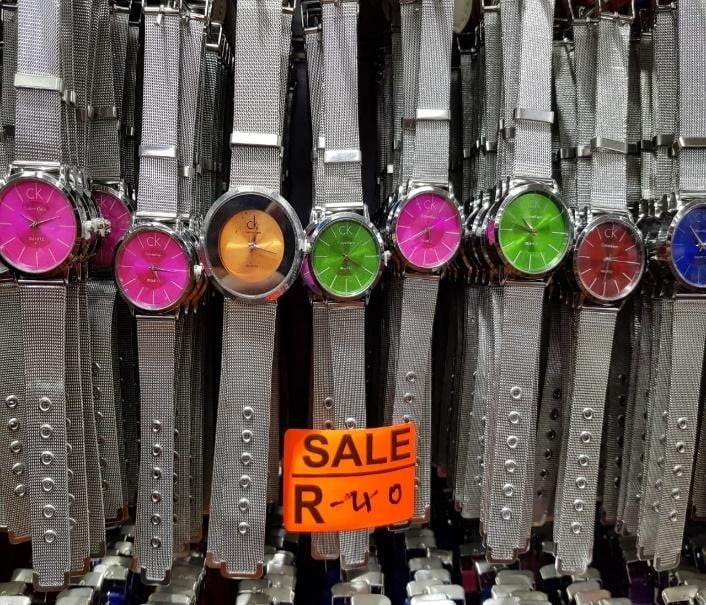 Now a business district, Marabastad was once a residential settlement

Location: Found in the city centre of Durban, located on the coast of Kwa-Zulu Natal (map link)

Challenges of enforcement at this marketplace: The Durban CBD comprises shops ranging in size and predominantly foreign owned, which sell a wide variety of counterfeit goods. Many of these retailers stock average quantities of counterfeit goods in their shops and seem to favour external storage, either in vehicles parked strategically throughout the city and/or storage facilities. The challenges in conducting enforcement operations in the Durban CBD range from the leaking of information, to hostilities when conducting search and seizure operations.

Despite the large number of shops, which seem to operate independently, there are several key role-players who manage and control the trade in counterfeit goods at an extreme arm’s length, which makes it difficult to implicate them in any illegal operations.

Recommendations to brand owners: The Commercial Crimes Unit of the Police is dedicated to combatting and enforcing intellectual property rights in Durban. Despite its limited manpower, the Unit is more than willing to assist and conduct search and seizure operations focused on counterfeit goods, and thereafter drive criminal prosecution of the suspects. Brandholders are encouraged to engage and support law enforcement through the lodging of formal complaints. 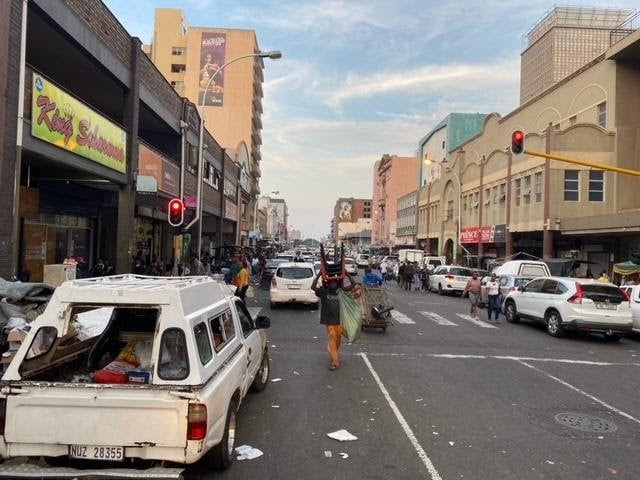 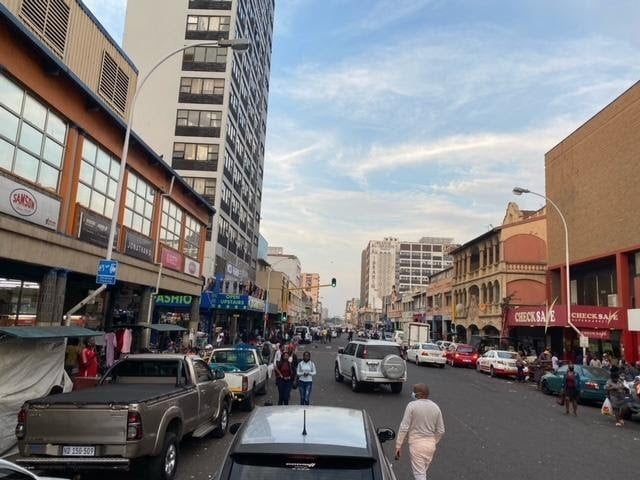 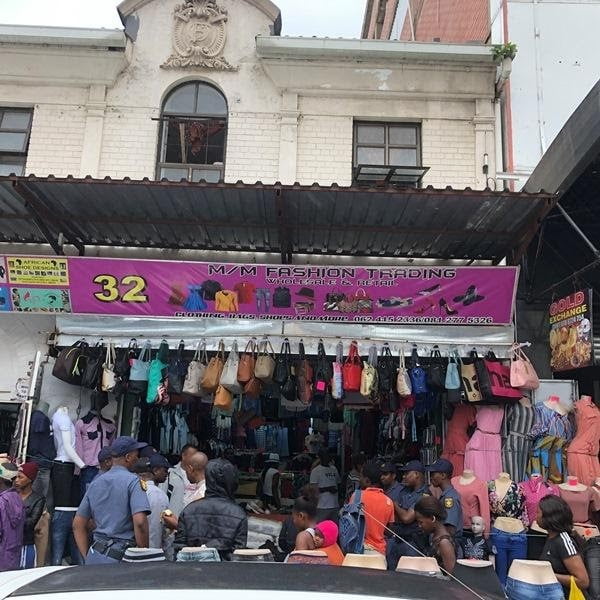 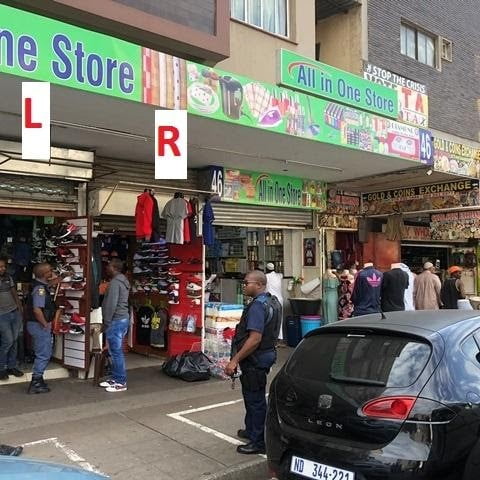 Durban’s CBD is a diverse mix of business, retail and tourist attractions

Location: Musina is the northernmost town in the Limpopo province (map link)

Challenges of enforcement at this marketplace: China City in Musina houses numerous small- to medium-sized shops offering a wide variety of counterfeit and unbranded merchandise for sale.

The counterfeit goods in question are usually smuggled into the country from Zimbabwe through the Beitbridge border post.

Recommendations to brand owners: To effectively take action against the relevant traders, it is necessary to conduct in-depth investigations and surveillance, and obtain test purchases and search and seizure warrants to be executed at the suspect’s premises. 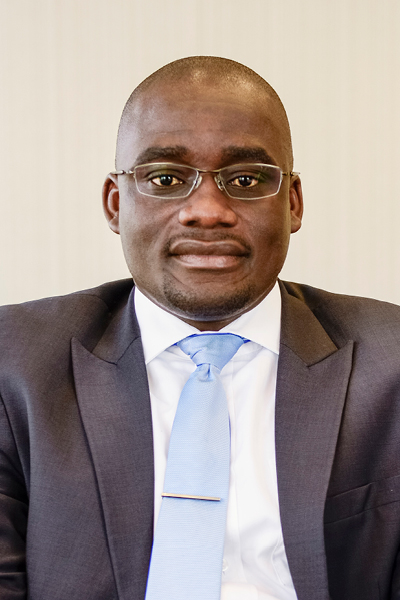